Caol Ila is hidden in a quiet cove near Port Askaig. Many consider this locality to be the wildest and most picturesque of the island. Situated on Loch Nam Ban, the site is ideal thanks to the abundant supply of good water. Caol Ila (Gaelic for ‘the Sound of Islay’) was built in 1846 by Hector Henderson – a Glasgow businessman with a keen interest in distilling. Like Bunnahabhain and Bruichladdich, the development of Caol Ila created along with it, a community of its own. Without these distilleries, it is likely that there would have been little sustained human interference in these areas at all.  Caol Ila is considered to be one of the lighter of the Islays. Medium-bodied with a rounded flavour. Pale in colour with a greenish tinge. This malt has a peaty nose, with distinct floral notes. It is described as tasting slightly of seaweed/iodine, lightly medicinal, smoky, salty, sweet with a dry peppery finish. 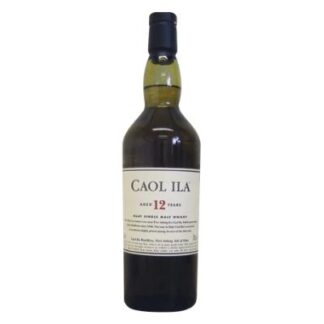