The distillery at the Isle of Jura has taken a new path. That is why they couldn’t choose a better name for the entry whisky of their new Signature Series range: Jura Journey. This small Scottish island is (in)famous for having just one road, one pub, one distillery, and a population of only 200. Deer outnumber people there.

Recently, and after a strong investment from Whyte & Mackay, they’ve decided to twist a bit their brand. This is why they’ve launched a new basic range, meant to turn the brand into one of the single malt scotch references.

Jura Journey is the starting point of the new rage, a NAS scotch produced, as all the range, with a combination of peated and unpeated spirit that will give a slightly peated style. For Jura Journey, the whisky has been aged in American white oak ex-bourbon barrels. It has been bottled at 40% abv, without chill-filtration and no added color.

The Scotch
In the glass, Jura Journey is pale yellow. On the nose, it is light and herbaceous. Some soft notes of white grape and pear with a slight citrus touch. There is a sweet side full of vanilla and shortbread, with small flashes of peat smoke.

On the palate, it is quite similar to the nose. Jura Journey is soft and creamy, though quite young and simple.  The spirit herbaceous notes predominate, followed by sweet fruity notes. It is really fresh, with an almost imperceptible smoky touch. The finish is really short and a bit dry.

Reinventing a brand should be a strong bet on a full product, a whisky that everyone at the isle of Jura should be proud of. And though I feel bad about it, Jura Journey is not that whisky. While looking for new consumers, it seems that Jura has forgotten that what makes a whisky special is the richness of its nuances.

Jura Journey is a simple and plain whisky, which is hard to go deeper. For the same price, you should find a handful of scotch (and non-scotch) whisky brands that will surely give you way more. 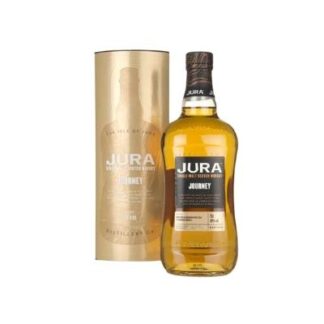