Maturing whisky in former red wine casks is nothing new for Starward. One of their first ever batches was majority aged in Barossa Shiraz barrels. However their latest ‘Project’ takes a slightly more focussed approach. It’s a collaboration with the iconic Australian winery, Yalumba, and draws on one of their flagship offerings, ‘The Octavius Shiraz’ – reported to be the world’s only red wine aged in 100 litre octave-sized barrels. It’s worth noting that Yalumba is the only winery in the southern hemisphere to handcraft barrels in their own onsite cooperage. Their expertise in wood selection is partly what makes this release interesting. The freshly emptied American oak casks were sent to Port Melbourne and filled with Starward’s signature single malt in 2018. Scotch whisky lovers will be familiar with the concept of octaves. As with the Quarter Cask approach, essentially, the smaller barrel volume creates more wood-whisky interaction, allowing the single malt to soak up barrel characteristics faster. Slated as a limited edition, the total outturn remains undisclosed. 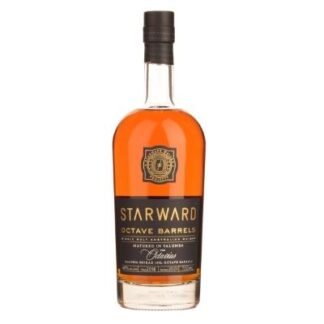